On 12 January 2010 Haiti was devastated by a magnitude 7.0 earthquake. An estimated 230,000 people lost their lives, several million had their homes destroyed and the nation’s infrastructure was extensively damaged.

The recovery and rebuild of Haiti – already considered to be the poorest nation in the Western Hemisphere – has been slow. Despite billions being pledged in aid following the earthquake, much work remains to be done to restore basic necessities for many. 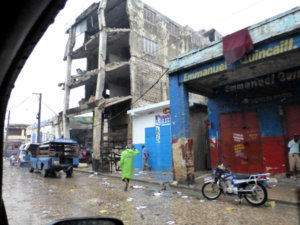 In April, all going to plan, I’ll be travelling to Haiti with 3 other Kiwis to construct a school building in a community not far from Léogâne, the epicentre of the 2010 earthquake.

The project is the fruit of much work done by the Kenbe La Foundation, established by Nelson woman Emily Sanson-Rejouis who lost her husband and two young daughters in the earthquake. Kenbe La means 'never give up' in Haitian Creole.

The Kenbe La Foundation shipped three containers of aid donated by New Zealanders to Haiti. As well as medical supplies and equipment and a range of other essential items, the shipment included the precut building we’ll be putting up along with tools and equipment generously supplied by businesses around NZ.

We’ll be living close to the building site which is next to the existing school building and working with locals on the project. This new 3 classroom building will enable the school’s existing roll of 120 to be increased by a further 80 children. These are students who would not otherwise have the opportunity to attend school.

New Zealand has its own education issues and many have to grapple daily with the realities of a devastating earthquake, but I think this trip will put a new perspective on things. I’m looking forward to being able to do something, however small, to help in the rebuilding of Haiti – and bringing back some inspiring stories.

If our internet connection allows, I’ll try to get some updates posted here as the project progresses. Trip dates: leaving Nelson April 2, back April 26.

Fund-raising for this trip is ongoing – you can support the project here.

Haiti shares the Island of Hispaniola with the Dominican Republic