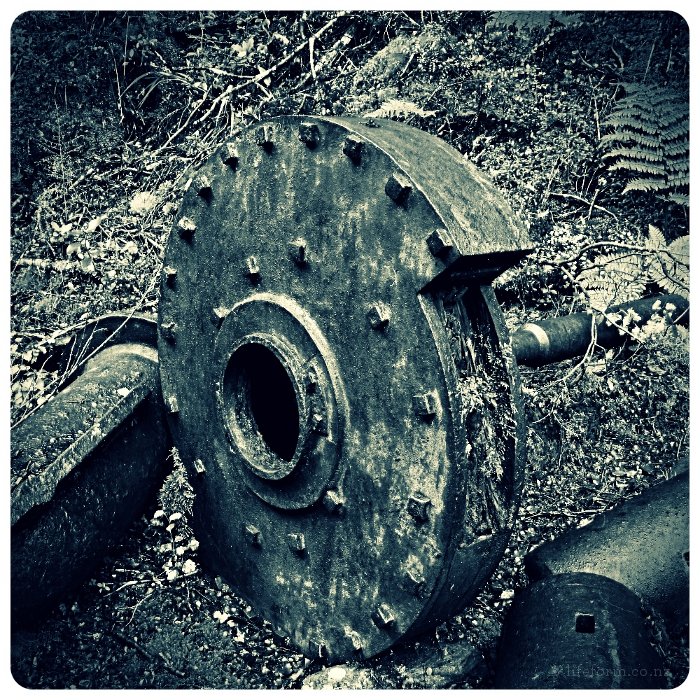 More 19th century inventions this week. The focus of this shot is the reaction turbine (I think) of a quartz stamper which has been lying in this spot near Courthouse Flats in the Wangapeka for over a hundred years.

The complete set of iron castings for a quartz stamping battery (I may post some more images) were brought to Nelson from the Thames Goldfield in Auckland district in 1870 on the sailing ship “Taranaki”. From Nelson it cost $86 to haul it in bullock wagons over 84 kilometres of dry roads. The final portion of the journey involved sledging along boggy bridle tracks and rocky river beds. Even thought the distance was only 18 kilometres the cost for this arduous section was $200, which in 1870 was almost equivalent to a years income for a miner.

All this effort was in vain. The goldfield proved to be a failure and the machinery was never assembled. Because of the high costs of transportation it was not economic to remove and sell it. At one of the Shareholders’ meetings the following prophetic suggestion was made:

“The machinery should be allowed to repose in its present position at the Wangapeka, where in ages to come it would probably be dug up by some venerable antiquarian and pronounced by him to be the remains of an extinct monster.”

These photos taken by Rob Edwards of Lifeform Digital are licensed under a Creative Commons Attribution-NonCommercial-NoDerivs 3.0 Unported License and may reproduced for non-commercial purposes as long as attribution is given. If you’d like to use any of these photos commercially or without the watermark please get in touch.